I learned many lessons from the late author chef Anthony Bourdain, including: 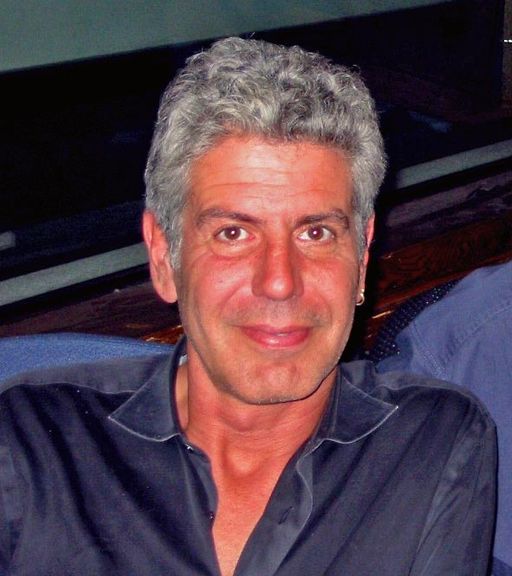 I’m not sure I would’ve tried pho had I not seen so many TV episodes of Bourdain grooving on it, let alone, know how to pronounce it. (More like “fum” than “fo” in “fee fi fo fum.”)

My favorite local pho place closed about two weeks ago. The owner/chef/cook made the best broth in town. She also said she had to be careful about the cooks she hired because they’d steal her family recipes to set up their own pho kitchens.

But ever since she closed, I’ve often wondered which which restaurants her thieving employees opened, so I could get a decent pho fix. It’s not cheating if she closed her place, right?

But, as my momma taught me, if I need to ask if I should do something, I already know it’s wrong.

Like profound lessons from my mother, one of the main lessons Bourdain taught me goes along with another lesson from my momma–how to be a good guest and a good presenter of unusual ideas.

Even in this age of snarky confrontation, of which his “knife skills” were legendary, he’d be kind and consider The Big Picture of sharing a meal with hosts of limited means, as well as protecting his sources left behind after he returned to the comforts of home.

He also showed the humanity behind the labels attached to the humans enmeshed in conflict.

Not the “good” kind of conflict, like every great story needs, but real life conflict, from which we lucky ones may never see as we enjoy fictional strife to escape our First World Problems.

To give you an idea, here’s what Bourdain said about Gaza in his visit for “Parts Unknown:”

“There’s no hope, none, of ever talking about it without pissing somebody, if not everybody, off… .

I’m not the only one who sat up and rewound the DVR to play back the line. His words reflected the resignation I’ve felt about some topics I write about, topics I’ve seen turn into a “conversational third rail.”

When I Googled the “Parts Unknown” episode for a video clip, I found quotes in this article by Simon Thomsen written for Business Insider of Australia. , as well as the aftermath of Bourdain speaking his mind once he’d returned home.

Bourdain may have been talking about Gaza, but what he said applies to any polarizing passion.

Heck, four years after that episode aired, even over here where we find safety in fictional conflict, if we express an opinion, we often risk relationships, even with family.

Believe it or not, equestrian activities can be polarizing. Some make me cringe, like wild horse races and stallion fighting. (Don’t look up either of those. Just sayin.’) And some other animal lovers reject activities I accept and even appreciate, like, urban carriage horses and horse racing.

The setting of my mystery novel is so controversial among horse people and so polarizing that I decided to invent a breed of horse. Not hard. New breeds of horses are invented every day.

Still, as I follow the real life stories I research, I often think of the “No Reservations” episode in which Bourdain visited the Mexican hometown of his buddy and colleague, a cook he’d worked with back in the day. They chowed down on the local street food, “comfort food,” and went to the bullfights, even though Bourdain had avoided the spectacle, until then.

I replayed a video segment from the “No Reservations” episode. This line, delivered as a nonjudgmental observation also struck me:

It is–whether you like it or not, whether you find it exciting or ugly–an expression of something in the character of the culture.

Bourdain hadn’t wanted to go sit by the bullring, but he loved his friend, plus wanted to experience and show us in TV land what childhood forces had produced his co-worker, who’d moved so far away from home.

I also think he wanted to be a good guest and not be overtly judgy in a recorded medium.

Tony also made the observation:

It’s a family thing. (He references his friend’s family members sitting with them in the grandstand.) Not everybody is enthusiastic about it. (His friend’s) mom, for one. Me, for another. (He refers to the so-far well-behaved yet partying crowd) very much at odds with the theater of cruelty to follow. Maybe if you start as a kid, you get used to it.

Bourdain has also stated often, we should know where our food comes from. Which is why he sometimes participates in hunting or slaughtering of the meat animal du jour, to honor that sacrifice.

No one knows as much about life and death as country kids who live close to the farms and the land.

They know, some animals you name and keep, others you don’t. And how difficult that dichotomy can be to maintain.

Often, rural festivals celebrate a past born in agriculture and rooted in hard times lived close to the earth and its whims.

Bourdain pointed that out often. I’ll miss his observations.

So, Tony, among many other things, thanks for all the pho.

Thank you for your generosity of spirit to be open minded with cultures featuring practices you may abhor. Your example has kept me on track with my Why as I rewrite the beginning of my novel.

What do you think? Cancel reply

This site uses Akismet to reduce spam. Learn how your comment data is processed.